Recently I have done the impossible and left my house. I have “touched grass” as the kids say. I did in fact, actually touch quite a bit of grass, so there you are. I went on a trip for four days. I initially wanted to stay for longer, but I know now that I wouldn’t have been able to afford it. Unsurprisingly, leaving my home was quite enjoyable, and I probably really needed this. For my troubles I have brought back some art postcards for my wall and a cool rock. Aw yeah.

I was able to do both of my favourite things to do outside my own home which include wandering around stuffy old buildings and wandering around wide open green spaces. My ratio of wanting to be in nature and wanting to be in historic locations has been sufficiently met, happy day. Now I will stay in my room for the rest of the year. I got to visit a really beautiful museum with a very interesting collection, although the person I was with would say it housed too many pots. It also held an art gallery where I got to see work by Monet, Turner, Degas, Rubens, Bruegel the Younger and one of my favourites: Joseph Wright. There was also a great collection of contemporary art including an exhibit on David Hockney. I also found a new favourite painting which I’ll include at the end of this entry: Human Fragility by Salvator Rosa. I would have loved to have stayed at the art gallery a bit longer, but it took us all day to go around and by the time we got to the end it was almost closing time. I saw some really amazing buildings, with architecture dating as far back as the 13th Century mixed in with brand new post-modern buildings. It was a really beautiful and inspiring place, crazy to see a gothic chapel connected to a brutalist housing complex. In amongst the buildings were so many parks and grounds and areas of greenery it was amazing. I don’t think I’ve ever seen what looks like a country estate with grazing cows right in the middle of a city before. People talk about London being crazy, but London had nothing on this. Everyone there was incredibly friendly, and I haven’t seen so many cyclists in my life. Honestly the whole place felt like a fake city from a movie. I wouldn’t have believed there was a city this nice. (Have you worked out where I went yet? Haha)

A few things did go wrong during my trip, I forgot my phone charger which sent me into a panic when it died and I had three days of trip remaining in which I needed it. I also only brought one pair of shoes that I thought would be fine, but seemed to greatly underestimate the amount of walking I’d be doing, which resulted in blisters all over my feet and incredible pain. I spent the second morning in a mountain warehouse looking for discount walking shoes and blister plasters, which admittedly did help a lot, but the continued walking did put a lot of pressure on my destroyed feet which meant I still had to keep resting due to the pain. I had to get Ubers across pretty short distances, so even if I was thinking about going on another adventure, my bank account now says no. I spent so much on this trip that I didn’t think I was going to, you wouldn’t believe. The worst part is I thought I was prepared for any eventuality on this trip. Shows what I know right? This also really brought down the reality of how unfit I am. I knew never leaving my room for a year would probably mean I was out of shape, but I wasn’t expecting it to be this bad. Guess my new goal needs to be starting an exercise regime. I hate exercise but I see now that its necessary. If I’d been in shape a lot of the things that went wrong on the trip wouldn’t have, and I’d have been able to walk to a lot more of the places that I wanted to see. I really have no idea where to begin. A lot of people suggest running as a starter, but I don’t really fancy running around the area where I live. I’ll have to put a lot more thought into it.

All in all I’m glad I got out, even if it was only for a few days. It’s a real shame that it costs so much to really do anything anymore, else maybe just maybe I might go outside a bit more. 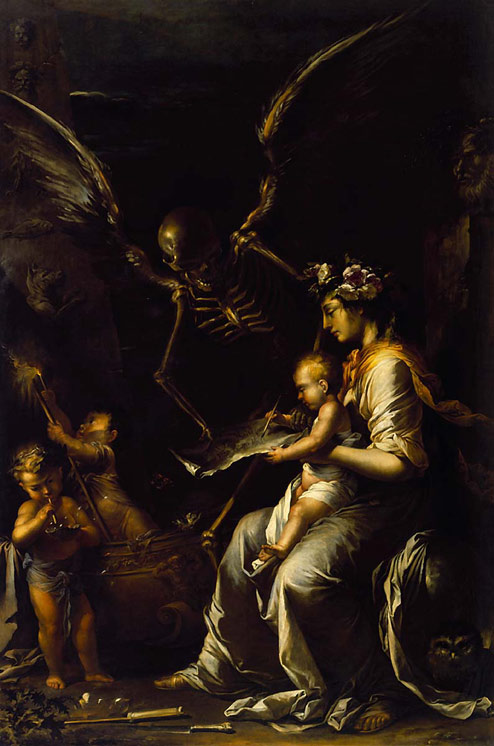 L'Umana Fragilità (Human Frailty) by Salvator Rosa. Click on the painting for more information.
PREVIOUS← →NEXT