It’s been ten days now since my birthday. This was the second birthday that I spent alone, and I had a much more enjoyable time this time round. When I say alone, I mean entirely by myself. Other birthdays when I’ve been ‘alone’ I’ve still been at home, so I’ve had my family around me even if I haven’t done anything. Last year was the first time I spent my birthday living alone, with no room mates or friends for company. It was ok, but I didn’t do anything special. I had wanted to visit the museum, only to find that it was closed one day of the week, my birthday being that day, so instead I went shopping and impulse bought some clothes because I didn’t want to go home empty handed. This year the museum was open, so I went and really enjoyed myself. The museum was split between the history exhibits and the art gallery, which was located upstairs. I decided to visit the art gallery first, and ended up spending my entire day there. I managed to just about see everything before the security guard told me I had to leave because they were closing in five minutes. I was upset that I only got to see the art, as I’d really been looking forward to the exhibits, especially as they had a large collection of portable antiquities finds (metal detector finds or items otherwise discovered by the public)- my dream is to find something worthy of being displayed in a museum. I had no idea that the museum was as large as it was, which means I now need to go back on another day to view the rest of the museum, that said, the art gallery was incredible. Such a variety of works, a shocking amount of names I recognised, and you could get right up to everything, it was amazing. So many places feature their art behind barriers and glass, placing you several meters away. This gallery allowed you right up to the work to see each individual brush stroke, or pencil mark. It was also reasonably quiet all day, so you could take your time looking at everything without worry of crowds hurrying you along.

I was absolutely delighted to see a Lowry that I had no idea was in their collection. I had a really lovely chat with the guide for that room about it, and some of Lowry’s other works including a debate about whether a large animal at the front of the painting was a rat or a cat. There was one work there that specified it was not to be photographed, at the request of the owner, a Rembrandt. I took a picture because I’m a rebel without a cause. I’m not entirely sure how I feel about barring photos. Flash photography is of course banned for obvious reasons, but without flash, I don’t see the problem. Not everyone has the ability to travel to the location where a work is being displayed, does this mean they should never be able to see it? I understand and agree with the thought process that art is best viewed in person, that it loses a lot of intent and value when viewed through a photograph, but to stop it from being viewed at all? That doesn’t sit right with me. The beauty of museums and galleries is that any and everyone can come and view the work, limiting that feels wrong. Despite all this, you can see the painting on the museum’s website which makes the whole no-photography thing feel even more pointless. I’ve included the painting and a link to more information at the end of this entry.

Despite spending the day alone, I had some very sweet messages from friends and family, and a few really cool gifts. My brother got me some really cool Haruhi Suzumiya figures, a Yuki nendoroid and a Haruhi figma. My Mum got me a Build a Bear gift card, which I used to finally buy the Tom Nook Build a Bear I’d been wanting since it came out. The guy in the shop really saw me coming and I ended up buying the voice box and a candy floss scent, just barely turning down a beating heart as well. We also ended up having a five-minute conversation about TF2 for some bizarre reason, which I can’t remember how we even got onto. Hearing someone say the word “Australium” in a Build a Bear whilst stuffing Tom Nook from Animal Crossing was retrospectively, an incredibly surreal experience. I love gifts like this, because they’re things I want but would never buy for myself. I can’t justify spending money on figures or plushies, but they’re great little items you want to own. I feel a little guilty about the figures, as I know I won’t be able to afford something as good for my brother when his birthday rolls around. One friend, God bless him, even bought me Mario Kart because he was fed-up of not being able to play it with me. I managed to persuade him to accept a drawing in return for that one, so I’m working hard on a picture of one of his D&D characters in the most detail I’ve done in a while haha. He also made me the most terrible ecard I’ve ever seen and it really made me laugh. It’s a running joke between us that I share my birthday with the release of Joker (2019), which we now call Joker Day. He made me a screen recorded ecard complete with a “low resolution preview” watermark plastered across the screen wishing Joker (2019) a happy 3rd birthday-oh and also me. We later realised that Joker Day is now also the release date of Overwatch 2, which might be even funnier.

Birthdays are a very funny thing, the arbitrary marking of how many years you’ve been alive. When that date rolls around you think hm yes, its been exactly a year since this last occurred and then fall into an analysis of what has actually changed or been accomplished since the last time. It had been going this way for a while, but this year seemed to be the first year that it really genuinely dawned on me: I will only get older. I seemed to be stuck in a strange feeling for the last few years that I was still a teenager, even though my age would suggest otherwise, and that I had time to make mistakes and feel unsure, because there was so much time ahead of me. This year seems to have finally shaken that feeling, I am an adult and every year my youth will get further and further away from me. I’ve very suddenly become afraid of getting wrinkles, which seems bizarre considering I’m still in the earlier half of my twenties. I think it might be how much I’ve neglected myself in the past year, I fell into taking zero care of my skin or appearance and now I’m concerned its going to age me. On the one hand, I think this concern might be a good thing, because its showing that I care again, as opposed to being content to let myself rot the way I was before. However, caring has only made me anxious so far, and worry about my appearance as opposed to actually acting on it. I used to have an intensive skin care regime which involved about 10 products. Over time I realised this was excessive (and expensive), and cut it down to about 3 on the daily, but I was still careful to do it every day. Last year about the only time I even washed my face was If I was absolutely filthy, or the once in a blue moon time I would wear makeup in order to prep my face, so it would actually go on properly. I never bothered to take it off afterwards. Depression is the most persistent form of rot, it takes root in your self-care, it takes root in your relationships, it takes root in you home and your work. Nothing is left out, and everything suffers. I was aware coming back that I wasn’t ready to restart university, but there isn’t anything I can do about that anymore. I have to finish my course, and if I fail, I fail.

I’ve purchased a hobonichi journal. My brother said that they are great motivation, because they’re so expensive you have to use it, which is in fact, good motivation. I was excited to start using it when I returned to uni, because I didn’t realise that it starts in January for 2023, so I am now using a random notebook instead. I’m currently just using my notebook to do the most basic bullet journalling, trying to manage chores and work and attempt to motivate myself to act. I hope to do something a bit more when I start using my hobonichi. Valyce Negative wrote a great post a while back about daily journalling, and I think I’m going to take her advice. The hobonichi came with its own little carrying bag and inside are the words “Today is the only day the me I am right now will ever exist. I want to keep a record of that so the me in the future won’t forget them.” I struggled before with keeping daily diaries, at most only managing to keep them up for a few months. Hopefully the price tag of the hobonichi will keep me motivated, because I truly regret losing the memories of the “Me”s gone by. I’d like to think I’m heading towards a better place now than I was the same time last year, it’s going to be interesting keeping a regular diary and seeing how that progression plays out. I’m getting older, but that doesn’t have to be a bad thing. 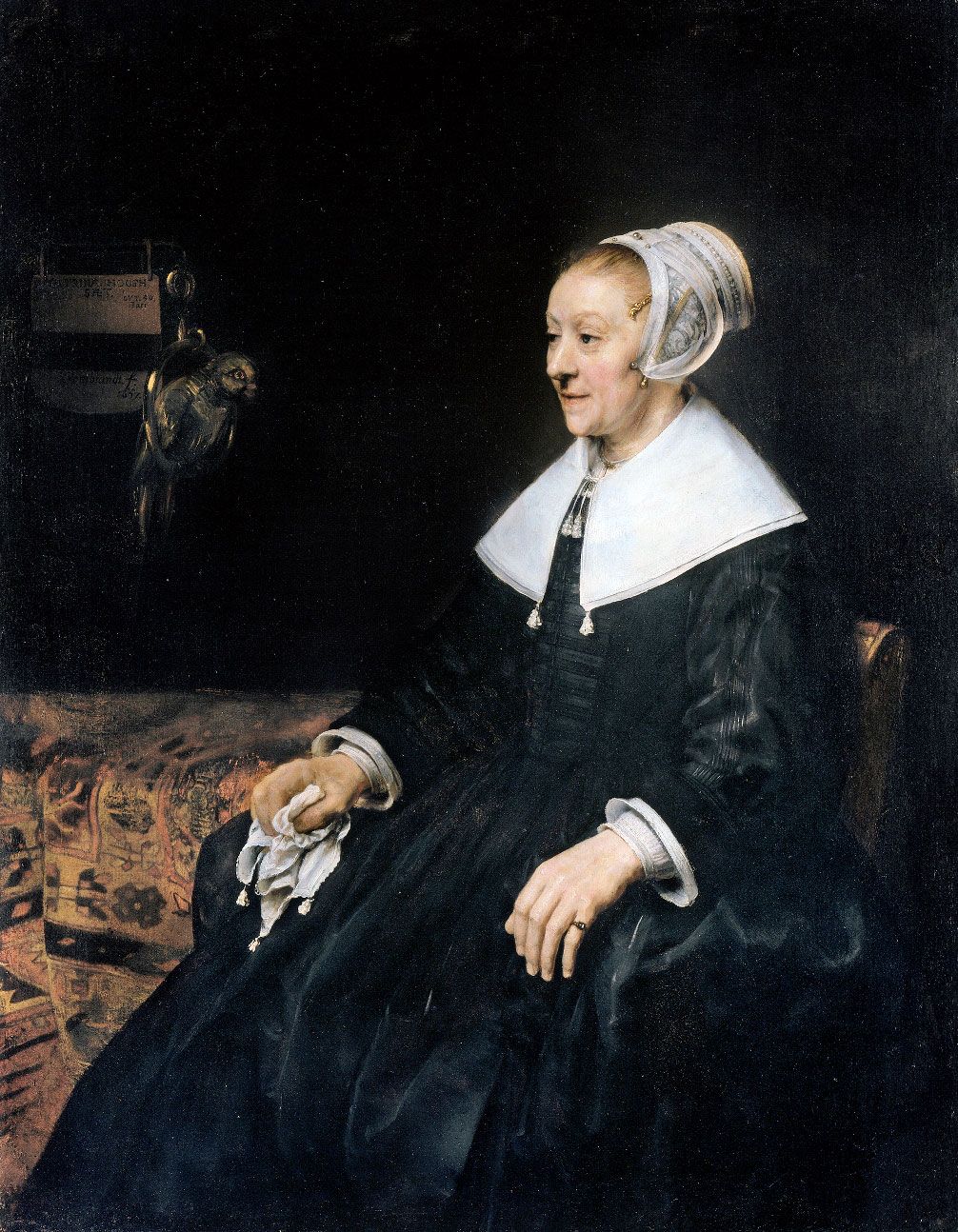 Portrait of Catrina Hooghsaet by Rembrandt van Rijn. Click on the painting for more information.
PREVIOUS← →NEXT